Around the World – Brazil

So when we started on this journey of preparing, cooking and enjoying foods from around the world, we gave Miss E the responsibility of picking our next country for the following weekend. And after a very successful Heritage Weekend, where we celebrated South Africa and Germany, she went to her world map and pick.......Brazil!!!

Oh my goodness! What a choice! Bom Dia! At first, I knew this was going to be a very flavourful journey indeed. But as I started looking at recipes, I realised this was also going to be a very sweet ride. When I searched for desserts, I came across many that made use of either sweetened condensed milk or Dulce de Leche - the latter being made from the former.

I went to three different grocery stores and eventually asked my neighbour (who is from Brazil) if she had had any luck, but Dulce de Leche is not available here. So what is a girl to do? Make her own, of course. It was super easy: just put a can or two of sweetened condensed milk on their sides in my slow cooker and pour enough hot water to cover the tins. Then cook on slow for 8-10 hours. I did that on the Friday, then took the tins out and allowed to completely cool overnight. The next morning I opened the tins, scraped all that delicious Dulce de Leche into a bowl and gave it a quick beat with my electric mixer until smooth. It was good to go. There is still a mason jar half-full with yummy goodness in my fridge - I really should use it in something soon. 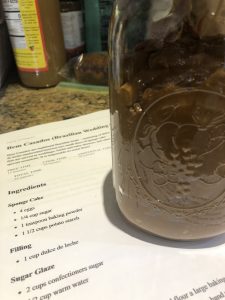 A jar full of delicious yummyness

Anyone who has ever been to a Brazilian wedding (or had Brazilian guests at their own wedding - Bettina) would know what these are. In English, it is literally called 'Wedding Cookies'. Sponge Cookies soaked in simple syrups, sandwiched together by Dulce de Leche. It doesn't get sweeter than this. They were yummy, even though the consistency was not that good - owing to the fact that I had to make do with Potato Starch Flour and the recipe called for Potato Starch. I had never used either for baking before and so wasn't sure how different the end product would be. My neighbour was kind enough to say that they were nice. 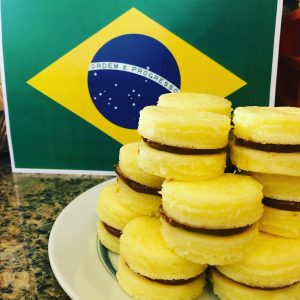 These were very sweet, I could only eat one...every hour 🙂

Oh. My. Goodness. This One-Pot-Shrimp-in-Coconut-Sauce was a freaking bomb!!! I love shrimp in general, but this dish knocked it out of the park for me. It was a huge it with the family, even though Miss E doesn't eat shrimp, she enjoyed the sauce very much. I highly recommend this dish. It was super easy to make and I used an immersion blender instead of a regular blender, simply because that's what I had on hand. This is the recipe I used. 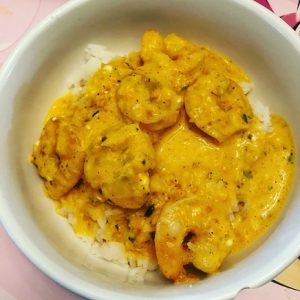 This was so good. It's gone into my recipe book for regular meals

I had one more treat up my sleeve, since the Bem Casados had turned out to be too sweet for me. These Bolinhos de Chuva is sort of like a beignet. And they are supposed to be shaped like raindrops, but I couldn't get the dough consistency just right. They tasted yummy though, so the shape I am not complaining too much about. 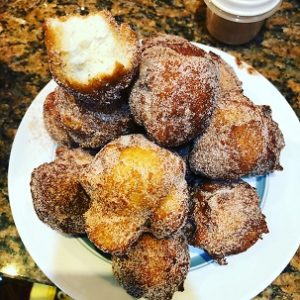 All in all, I really enjoyed cooking over our Brazilian weekend. Our tastebuds were definitely put on a rollercoaster ride. And even now, weeks later we are all still talking about that Shrimp.

Have you ever been to Brazil? Are you from Brazil? What id your favourite Brazilian dish or dessert? Tell me in the comment section below.

Catch you on the next post! Stay safe and keep cooking,
Zee

Around the World Through Food, My Kitchen
Zephora
No comments